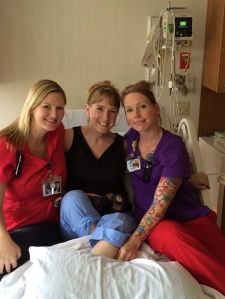 Crohn’s disease is insidious in nature.
I have been off all meds, and controlling my Crohn’s with SCD (the Specific Carbohydrate Diet) since November of 2011.
Then, one of Life’s Little Detours Happened.
Here are a few snippets from my journaling while housed on the hill. 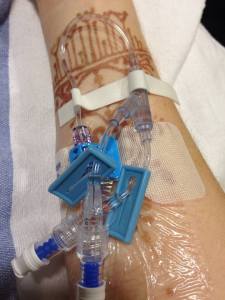 Adventures in Crohn’s:
First official hospital stay related to this crappy immune disorder.
My body is in Storm mode. Shingles to Crohn’s flare: things have gotten out of control.
I’ll be here until Tuesday at least. Monday will be a colonoscopy under sedation. (My 3rd, and I haven’t even reached 50 yet.)
I’ve already lost 7 pounds, good thing I had some extra butt in reserve. By the time I finish the scope prep, I should be all elbows and angles.
(Although, steroid Moonface might kick in to balance that out.)
Thank you to all the friends & neighbors who are helping out with HH and the dog. And the Shane.

Woke up with a dash to the can and severe cramping… Even the tiny bit of food I attempted last night was too much.
Morphine on board, letting things settle. Maybe back to broth later this morning.
On the bright side, my noc shift RN was a new grad from UP.
I think she was about 12, but like all UP Alum, top notch care.

Hard on my guys.

I’ve found the cure for Crohn’s!
Drink nothing but water.
Take high doses of steroids.
Quit your job,
Spend all your time sleeping with warm blankets in a quiet, dark room.
Easy !!

Part I: Tongue to Tuchus
Part II: Ileum and Ilium

Waking up to inpatient Day 5.
Time to attempt an update, despite the cloudy head.
Pain is lurking, worse always in the morning when the night meds have worn off and the guts want to wake up and play.
In the 7 years that I’ve been doing battle with my immune system, this is the first time my body has truly gotten the best of me.
The worst of the news is two-fold.
My CT scan revealed an advanced return of inflammation to my Crohn’s old nesting place : the terminal ileum, where there is now fresh inflammation, on top of old scar tissue. Now, I have involvement of the large intestine as well… A new thing. Crohn’s can run its course from tongue to tuchus.
With this new advancement, I currently have the full meal deal.

The second part, is that the CT scan also came with a new diagnosis. I have something called Ankylosing Spondylitis (AS). Another autoimmune disorder, could be called one of Crohn’s unpleasant cousins.
AS is a form of arthritis than can ultimately cause some of the vertebrae in the spine to fuse together.
So now, I have inflammation and scarring in both my ileum, and my ilium (one is gut, the other bone).
It’s all too much.
We haven’t told Harrison about the new AS problem yet.
Working on getting the mamma home first before we dump any more frightening information on him.
And as always, our little Blapplegate Trio is processing this with no “family” nearby.
I even type the word family, with trepidation… It should be a simple word, but for me it is the most complicated.
So I send you all my thanks and profound appreciation. Our friends, coworkers, neighbors, have been filling our world with your warmth. You are making the unbearable bearable.

The attending Family Med doc insisted on taking this photo, he’s sending it to my gastroenterologist.

A horrible experience, but I was surrounded by amazing health care professionals, and the love of my friends, neighbors, co-workers, and even my boss: Dr. Holland showed up every morning I was in the hospital, with his trademark dry wit, and gag gifts front the Plaid Pantry. (Hence the Twinkies and Energy drink above.)

2 thoughts on “Viewing OHSU from the inpatient side.”

Join 270 other followers
I'm Too Stupid to Travel