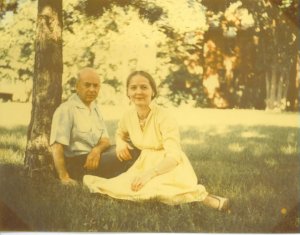 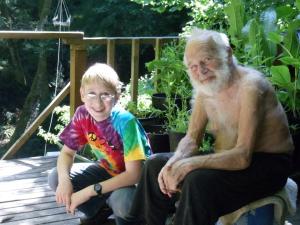 Getting this blog really rolling, will involve quite a bit of sorting~cleaning~catching up for me.
Over the years I have stashed 4, maybe 5 beginnings of journals (paper form, of course) in various places: old backpacks, the underwear drawer, the bottom of the pile of novels in the bed stand.  Not to mention the gems I managed to get onto Facebook, usually at 0500 as I was waking up for work. I had wonderful intentions of compiling those snippets at some point into a more cohesive format.
Here’s a tease for you: chapter titles for the memoir, jotted down on a trip to Seattle. (And why, by the way, is it that I must be home sick, or on vacation, to find the time and space to write?)

So hard to find a place to start. I’ll have to channel my inner Julie Andrews and start “at the very beginning.” It’s all about the Applegates, Oregon, the PNW. I can’t seem to escape my roots.

Next photo is my son Harrison, with Lindsay’s youngest sibling and only brother, “Ap” Teddy Applegate. DOB 11.10.1918

Both Applegate brothers, as far apart in age and politics and lifestyle as they were, were scientists at heart. One an engineer, one a physicist and a boat builder. In between were 4 sisters, born between 1901 and 1909. My grandfather was unusually progressive for his generation; he believed in education for women and helped to put all of his sisters through college.

The legacy I inherited from the Applegate women was one of advanced education and pioneer spirit. These were the granddaughters of the Applegate children who had grown up on the Oregon Trail in the 1840s. Drive and perseverance were the norm and the expectation for these women, especially when presented with opportunity.  All 4 had Masters degrees, and a couple PhDs, in math and/or science. They taught in colleges, worked in research laboratories in hospitals, one was a “WASP” (Women Airforce Service Pilot) during WWII.

When I was in my twenties, I had a BFA in fine arts from The University of New Mexico, with a minor in European Art History. I was working part-time as a clay artist, part-time doing retail, or nannying, whatever paid the bills. And I always felt woefully inadequate as an Applegate. I had been raised primarily by my grandfather, and wasn’t sure he would have approved of my life as an artist, had he still been alive.

Fast Forward some decades.  My only living grandparent, Lindsay’s wife Esther Applegate, was dying.  My life took a new turn. 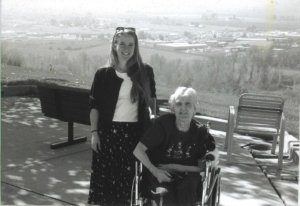 I was the family member who had the time, and much more importantly, the emotional capacity, to stay with my Grandmother during her final days.
She was under the amazing and transcending care of a group of Hospice nurses in Southern Oregon.
It was my introduction to the world of Hospice & Palliative Care. Little did I know that down the road that would become my new passion and career. But a seed was planted.
The nurses taught me about the normal biological changes that occur when death is imminent. The breathing patterns ~ how similar leaving the world is to entering it. (i.e. the breathing of a woman in labor, the breath of the dying. Full circle in the the most profound way.)

At the time, I was not a mother. But 10 or so years later, as I labored with my 9.5 lb son, I could really understand that connection.

I am so grateful for that time with Esther. There was a cot set up for me next to her bed. The last 3 days and nights of her life, I stayed with her. I held her hand, and helped turn her, and sang to her.

I have a terrible singing voice. Really, I can’t carry the tune to “Happy Birthday” or your most basic Christmas carol. But Esther was a captive audience. She was dying and I choose to think my presence was of more importance than my vocalizations.

I had recently seen the film “Reds” with Warren Beatty and Diane Keaton. The song “I don’t want to play in your yard,” which had been beautifully sung by Keaton in the film, was one my grandmother used to play on the piano when I was little. The song was stuck in my head, and as you can imagine, being such a terrible songstress, my repertoire was limited. I’m sure this was super creepy, singing this song to my grandmother like a lullaby of death. But there you go. I was the person that was there for her, and that was our song.

We were very close, Esther and I. I spent many long summers with her and Lindsay while my mother was working on her PhD. (Remember, there was a legacy, certain expectations for the women in our family.) The rest of that story has a place in another chapter: “The Braid.” It’s morbid as all hell, I promise. Just know that there are still certain drawers in my home that one does not want to investigate. Fair warning.