Bob tells everyone he doesn’t have much of an appetite, and he doesn’t give a hoot about any kind of holiday. Yet somehow, he never passes up an opportunity to eat some of Mr. Blitch’s cooking.
He says little to nothing to his grandson. Nor to his son-in-law of 19 years, for that matter.
But he will grudgingly follow his daughter out to the hen house for a visit to Marigold. It’s the small price he must pay for his supper, and he knows it. Humor the Urban Chicken Whisperer, and you will be rewarded with a meal. 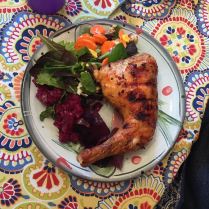 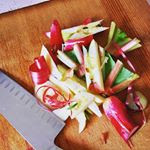 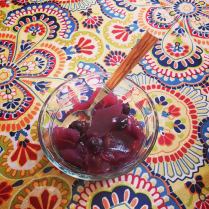 At this point in the Blapplegate Family home, any single day when no one is ill, and no one is working, is a day to celebrate togetherness and Life. Just simply being alive, being upright, being bipedal, and being somewhat functional.
This year, a special guest made the appreciation for Capital-L-Life rise even more to the surface: a dear family friend who had recently completed many long months of treatment for breast cancer was at the table. Just a few days prior, she had gone in for her first mammogram after treatment. The news was all clear and all good, and there was much to celebrate.

I wasn’t sure how to tell Bob that the pathology had come back from his latest skin biopsy with unfavorable results. (Unfavorable = cancer, in this case)
Again. His 4th skin cancer in left last few months.
It wasn’t even so much the news of yet another cancer; he’s grown accustomed to it by now. Born a true redhead in 1933, growing up on farms in Nebraska and then Oregon’s Willamette River valley, his skin was somewhat doomed.
It’s more the anticipation of an appointment: he doesn’t sleep well for several days prior, his terror of simply being outside is renewed. If I mark an appointment too far in advance on his wall calendar, it swallows his focus.
This time, I took a chance… I waited until I was driving him back home after the Easter meal at our house. I mentioned it casually: “Dad, the derm office contacted me… they didn’t like what they saw on that last biopsy. They want to whack that little spot off your cheek. They had an opening for tomorrow, so I took it.”
He was in good spirits, and he took the news surprisingly well. To his way of thinking, he got a twofer. Two days with me, literally the only person he allows into his world any longer.
What Bob doesn’t know is what a huge fucking deal it was for me to obtain this particular day off from my work as an Oncology Nurse Navigator. I had in fact made the appointment 5 weeks ago. Our dermatology clinic only performs Mohs procedures on Mondays. Mondays only, and only mid-day, right when I have the responsibility of setting up and taking notes for a weekly Cancer Conference. Presence of a Nurse Navigator is required, and getting coverage involves requesting another Nurse Navigator to drive from our main hospital campus 18 miles away. In short, it’s damn near impossible.

Anyway, things have improved since last year, when I had to literally travel from Bob’s hospital room at that other hospital 18 miles away and drive to fulfill my Monday obligation at the more remote hospital where I usually work. The support of a new manager has made it possible for me to occasionally request, and get, coverage.
(And oh yes, it’s also the law. It’s the Fucking law: https://www.dol.gov/general/topic/benefits-leave/fmla.
Just saying. But I digress…)

I made a change in my time management strategy as Bob’s caregiver last month: I bought a laptop, so that when I’m idling away the hours at medical appointments with Bob, I can multitask and study for my ever-looming Oncology Nursing Certification exam.

Mohs procedures are done in stages. The visible lesion is removed, and sent to an on-site lab for a peek under a microscope. The surgeon will keep removing only small slices of skin until they are confident there are clear margins (‘clear’ meaning the tissue is free of cancer cells).

If a patient is fortunate, they may obtain the clear surgical margin in just one or two slices. However, the appointments are made with the understanding that they may have to do multiple incisions, and the process may take 2 hours or longer.

I was feeling optimistic today: I had snacks for myself and Bob, I had my fancy new laptop, I had the day off work. We checked in early, and headed to the downstairs surgery suite. I stayed in the room with Bob to review the consent, and keep him company while they numbed him up.

They booted me out when it came time for the actual cutting. I cheerfully headed back to the waiting area, and pulled out my laptop. Ready to …. ready to realize that I could get no online service in the basement of this building.

Silly me, I don’t know how I never noticed this before, but this Derm clinic is located in a historic NE Portland building. It was originally a private mortuary. Later, it was purchased by Multnomah County, and became the county’s morgue.

So there I am, seated in the bowels of the former county morgue, with no way to access my study content. Did I bring any of my books or flashcards? Hell no, I had finally let go of my Luddite-with-slightly-Amish-tendencies ways, and stepped into the Modern Era.

And this was my reward.

So I sat, and became the new BFF of an elderly Veteran who was waiting for his wife. It was sweet. It was not how I needed to be spending my time, but it was sweet.

Bob came out in between slices. We shared a banana. I made him a coffee in the waiting room lounge. Free Coffee!! He was, I believe, in heaven. The doctor and nurses are incredibly kind, they dote appropriately on him.

He was done in about 2 hours. He had missed his lunch at the care home where he resides. Snacks are one thing, but it was 1:30 in the afternoon. One-half a banana and a couple handfuls of peanuts can only carry a person so far.

Me (starving): “Dad, can I take you out for Chinese food (his favorite)…?”
Bob: “Oh, no, I don’t think so. They saved some clam chowder for me back at the place.”

Off we go. I deliver him, with his pressure bandage covering half his face, and leave him to his chowder. (There is also a small plate on the side with a Bob-size treat: 5 crackers, a small cluster of grapes, and 3 Oreos.)

“Thank you” he says, as I depart. “Thank you for… caring for me.” You are welcome, dad. You are very most welcome. 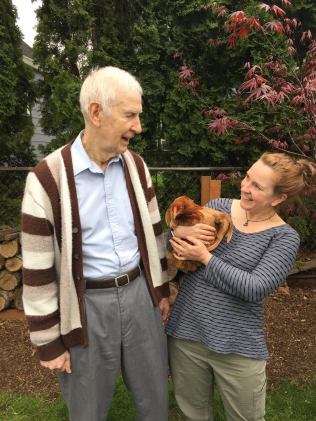